The Bariatric Center at Columbus Regional Health, a Coles client, is an American Society for Metabolic and Bariatric Surgery (ASMBS) Bariatric Surgery Center of Excellence®. The ASMBS BSCOE designation recognizes surgical programs with a demonstrated track record of favorable outcomes in bariatric surgery.

We wanted to make sure their newest marketing campaign communicated to potential patients that quality-of-life issues are the best reasons to have bariatric surgery. And we wanted to convey the Bariatric Center at Columbus Regional Health is the best center for patients in southern Indiana and surrounding areas to receive care.

Enter the “Now, I Can” campaign.

We worked with the Bariatric Center to find local patients who are known in the community and who were able to participate in a physical activity that was difficult to do before bariatric surgery.

To reach the most potential patients, we integrated the campaign with video (posted on YouTube and the Bariatric Center website), print ads, online banner ads and billboards.

Patient Earl Six was able to take up running after he lost weight — 150 pounds. “Once a 320-pound stress eater, Earl Six is now a 5K runner.”

Patient Anita Boggs is able to play softball after the surgery that helped her lose 105 pounds. “Benched for years by stubborn obesity, Anita Boggs is now a softball player.”

We are featuring Earl and Anita in current marketing efforts, and we have plans to incorporate more patients in future months.

The campaign launched in early May and has been well received! As a bonus, the campaign has grown organically, with many successful bariatric patients posting what they “now can” do on the Center’s Facebook page. 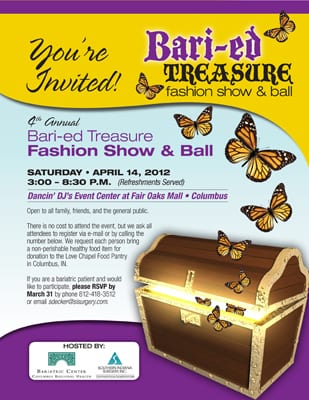 The 4th Annual Bari-ed Treasure Fashion Show and Ball will be held Saturday, April 14 at Dancin’ DJs Event Center at Fair Oaks Mall, Columbus, Ind. Hosted by the Bariatric Center at Columbus Regional Health, bariatric patients model their new, healthy lifestyle in front of family and friends. After the fashion show, attendees will dance to the music at Dancin’ DJs. the deadline to RSVP to sdecker@sisurgery.com is March 31. Or call 812-418-3512 to RSVP.